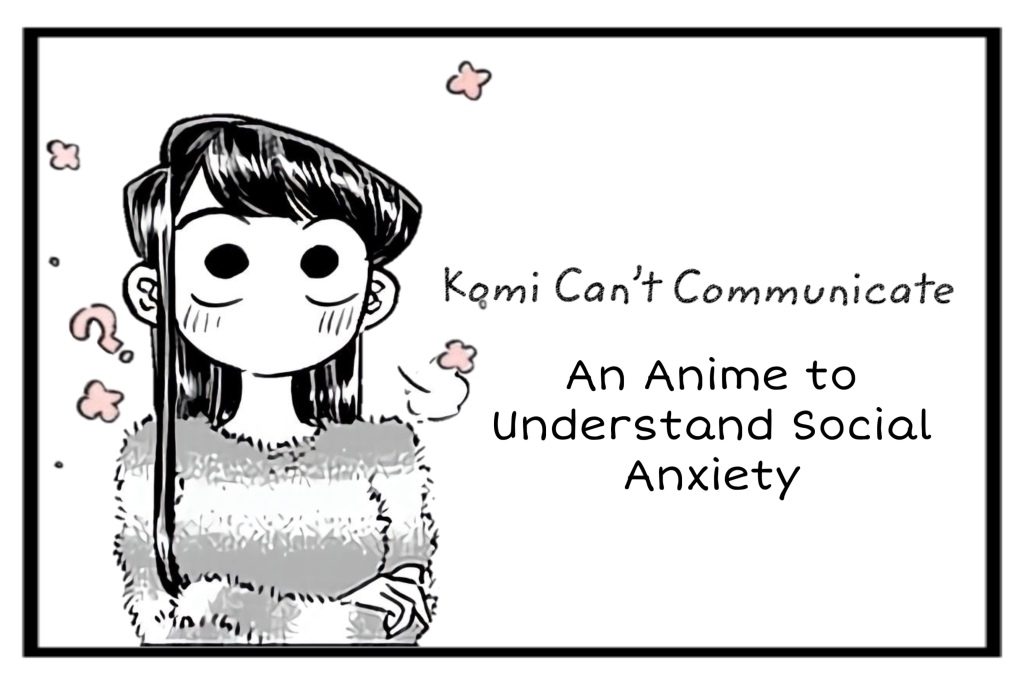 I think I’ve written enough articles about my life with social anxiety, but to find an anime series that represent my life was amazing! One day, as I was sitting by the table at a coffee shop, a friend recommended me to watch Komi Can’t Communicate. Her exact words were, “You need to watch it, because that’s literally you.” She described it briefly and I could see the relation, but I never thought IT WAS EXACTLY AS MY LIFE.

To guide you into what social anxiety is, is when every-day normal activities such as making a call, ordering food, talking to new people, causes a great amount of anxiety because of the fear of being judged by others, to the point where feeling they hate you. Some symptoms might be trembling, stuttering, not talking at all, sweating, trouble breathing, urge to cry, dizziness, and even muscle tension. Social anxiety can be treated with coping mechanisms to help you gain confidence.

Komi Can’t Communicate is an anime series that you can watch on Netflix. It’s pretty short, as it only has 12 episodes for its first season. Komi starts in a new high school, and everyone has their sight set on her because she’s very beautiful. Every student thinks she’s cold and conceited because she doesn’t talk to anyone, except Tadano, who dares to talk to her one day. She’s taken by surprise and looks at him wide-eyed as she starts to shake. That’s when Tadano figures out that she’s not arrogant, there’s something up with her. Komi tried to talk, but nothing comes out so she decided to write on the chalkboard to explain to him that she really wants to talk, but she can’t because she suffers from severe social anxiety. Tadano understands and becomes her best friend and translator, as he can interpret her expressions and it’s almost as if he can read her mind. Komi then confesses she wants to make 100 friends and Tadano promises to help her reach the goal.

Between funny moments and more serious ones, this anime is very relatable to those who have the same disorder. It’s great to know that someone in Japan had the courage to talk openly about a real-life situation such as social anxiety, because topics such as anxiety and depression are a taboo in Asia. It was genius to represent it just like it is but in a funny way.

One of the factors well represented in the series is that people who suffer from social anxiety usually have a comfort person who totally understands the situation and will help no matter what. In Komi’s case is Tadano. He looked for a way to communicate with Komi and this is by her writing her thoughts in a notebook. As the series goes on, she starts nodding and then talks a little. Having a comfort person is a great coping mechanism because usually they make you feel like you can do anything. There are certain situations where Tadano leaves Komi alone so she can overcome her fear, but he never leaves her side, he just stands afar where she can’t see him to see how she manages the situation. If he sees she can’t make it, he comes to the rescue. I also have some comfort people who push me to overcome my fears, but they also never leave my side, they watch me deal with the event and even give me words of encouragement if they see me starting to get stressed.

Another truth about social anxiety portrayed in Komi Can’t Communicate is the stress of ordering food or any other services. One of Komi’s friends pushes her to go and buy them a sandwich at Subway just because they want her to lose the fear of people. With the adrenaline of the moment, Komi accepts because she believes she can do it. When she arrived to Subway she enters the place, stares for a moment and then goes out. She keeps doing this for a few moments until she dares to order, but since she can’t talk at all, she tried ordering by pointing and glancing. The cashier misunderstands and gives her something wrong and when Komi gives the sandwich to her friend, they start screaming and saying is wrong. Komi starts crying uncontrollably. This is one of the situations I hate the most! You think you can do something but then your mind starts telling you that everyone around you is going to judge you, so you get blocked, you try to shush your head, you finally order it just to notice they gave you something wrong, but you can’t go back there to say it, so you just go with it. There are times where I preferred not to eat at all just because I didn’t have the nerve to say that I’m allergic to something that was included in the food. It’s mortifying!!!

One of Komi’s friends had a job and asked for help to hand out paper tissues as a promotion. Komi tries her best but when she hands them out, no one is taking them. Worst nightmare for someone with social anxiety: the rejection. Tears start pooling in her eyes, she starts shaking, and she’s about to run away when someone finally is in need for tissues, but the lady doesn’t know if Komi is handing them out, so she’s unsure if to approach her. This is something very common in people with social anxiety. We don’t look very approachable because often our face of fear is confused by a mean glare, when in reality we are dying inside. Lucky for Komi, her friends help her silently by telling people that she’s handing out tissues. Friends and supportive people are key to someone who suffers from social anxiety, because often they will know what to do in order to make them feel better and comfortable.

There was a scene that I totally identified with: when Komi wants to call Tadano but she doesn’t have the courage. Calls are a no-no for me and I’m pretty sure for anyone with social anxiety. You have no idea how stressful it is to make an appointment, to order pizza, or to have an interview by phone. Unless is someone we know, usually people with anxiety stick to texts and emails, and even then, there are times where our mind will tell us to just don’t bother. I’ve been with my boyfriend for 6 years and I still don’t dare to call him first or text him first. Though he always reassures me that I can just text him or call him anytime, there’s something inside me that doesn’t let me, and it’s hard because this had brought conflicts between us. But must of the time he’s very supportive with my situation.

Though Komi is made to portray social anxiety—she even has a tiny mouth to represent how she can barely talk—I love the fact that she’s not merely known for the disorder. Komi-san is more known because she’s good in everything that she does and because she’s beautiful. Many people with social anxiety are good at what they do, maybe is due to the fact that they don’t want be seen as a failure or because they concentrate a lot in what they do. In my case, I’m good in a lot of things, I have many talents and that’s because I take those things as coping mechanisms, so I concentrate a lot and do a lot of research.

This anime became very special to me because I could finally identify at full with a character. I loved that it was created and it’s going to change the idea that social anxiety is just a childish action for attention. It is really more than that. I wish I could just stop feeling it and leave it behind, but it has taken me years to cope with it. Yes, I’ve been doing a lot better than when I was younger, but there are still things I cannot do because my mind is stronger. I recently discovered that with the social distancing due to the pandemic, it has worsened again, but I’m working everyday to recover what I had achieved. Lucky for me, I have very supportive friends and family who understand, help me and take it seriously. Social anxiety is not a childish tantrum or a call for attention, it is a serious disorder that has to be addressed and talked about more often than it does. I’m glad that Komi Can’t Communicate was created and more people are going to know about social anxiety. If you enjoy watching anime, I encourage you to watch it. It’s short, funny, and enjoyable.