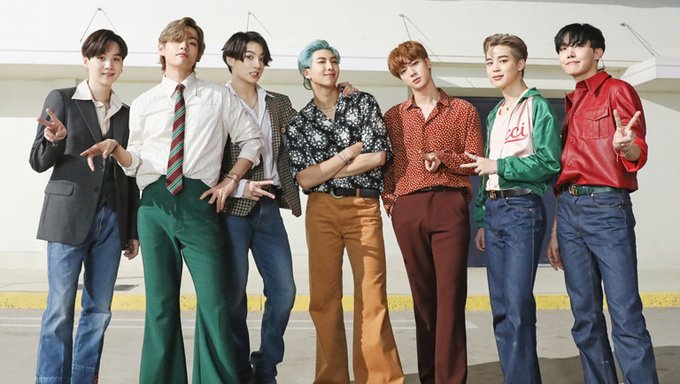 The K-Pop group released their new single titled Dynamite a week ago and they are breaking records and making history all around the world.

In hopes of giving everyone a little happiness in the middle of the pandemic, where everyone is unmotivated and feeling sad, BTS wrote Dynamite. Even though they are a Korean group, the song is completely in English because they wanted it to be an international BOP, and let me tell you, they are accomplishing it. With a catchy retro beat, you will find yourself dancing and singing, even when you’re not hearing the song.

The lyrics start describing a routine, like when we’re in lockdown, we use to do the same things on and on.

“Shoes on, get up in the morning, cup of milk, let’s rock and roll”

“This is getting heavy, can you hear the bass boom? I’m ready”

We might think they are describing the sound, but knowing BTS, I’m pretty sure the hidden message is that this whole pandemic situation is getting heavy already, we are tired.

“So watch me bring the fire and set the night alight”.

We can interpret this as if they came to save us in the middle of the darkness that has taken over us in these difficult times.

“Shining through the city with a little funk and soul, so Imma light it up like dynamite”

The song has a rhythm of funk and soul, and they came to light up our world with it, as a spark of hope.

RM has a line that says, “Ladies and gentlemen, I got the medicine, so you keep your eyes on the ball.”

As if saying that this song is going to be the medicine for our soul and we should not worry about anything, just keep focused on our goals, at least at this instant while listening to it.

Then the lyrics talk about reuniting with our friends and partying again, because that’s what we long for after this virus disappears or gets controlled.

“Bring a friend, join the crowd, whoever wanna come along.”

And then invite us to do those things we couldn’t do because of social distancing,

“Word up, talk the talk, just move like we off the wall. Day or night, the sky’s alight, so we dance to the break of the dawn.”

I want to mention that in the music video, they all start alone, away from each other and throughout the whole video they get reunited. This video is full of positivity, fun dances, and colors that appeal to your eyes and brain to make you feel happy. Personally, the first time I watched it I couldn’t stop smiling, to the point that my cheeks were hurting.

Now, let’s talk about the achievements and why is BTS lighting up the world like dynamite, as the song says. The video was released on YouTube at 12AM EDT, 20 minutes later it already had 10 million views! BTS made history in YouTube when it was confirmed that the video surpassed 101.1 million views in 24 hours, becoming the most-viewed video in 24 hours in YouTube history. As to now, it has over 200 million views in less than a week.

Dynamite is the #1 most added song on US radio this week, it has been certified as a Perfect All-Kill by iChart, it was the fastest son in iTunes history to reach #1 in more than 100 countries, it had 9.8 million streams on Spotify in just 16 hours and is the best-selling single on Netease. As for MELON, it was the highest debuting song and the fastest English song to chart on the platform in the first hour of release. We’re waiting for the Billboard charts this week to see their impacts too.

Dynamite had the support of many artists and different fandoms around the world, including the Moonwalkers, Michael Jackson’s fans. BTS mentioned one of MJ’s album “Off the Wall” and also used several of his signature dance moves such as the moonwalk, the crotch grab, the kick, and the spin.

The song received a lot of compliments for taking us back to the retro style with the sound, dance moves, outfits, and scenography used in the video. It starts in a bedroom full of posters of David Bowie, Elvis Presley, Michael Jackson, The Beatles, among others. Then, the rest develops between a record shop, a retro doughnut shop, a basketball court, and an open field. BTS is wearing jeans, colorful jackets, vests, baggy pants, shirts with retro patterns, and shoes with heels.

Dynamite was described as a healing song who came just in time to comfort everyone around the world and give us hope. The media is comparing this song with What About Us, We Are The World, and other songs that were created in times of crisis to spread awareness and give the people a break to take a breathe in the middle of the chaos.

BTS is releasing several remixes with new rhythms such as tropical, poolside, and EDM, appealing to every occasion and every taste of music.

Dynamite and BTS is definitely what the world needed in these desperate times. I invite you to watch the video (if you haven’t already) and to enjoy the song, because it’s really fun and refreshing.