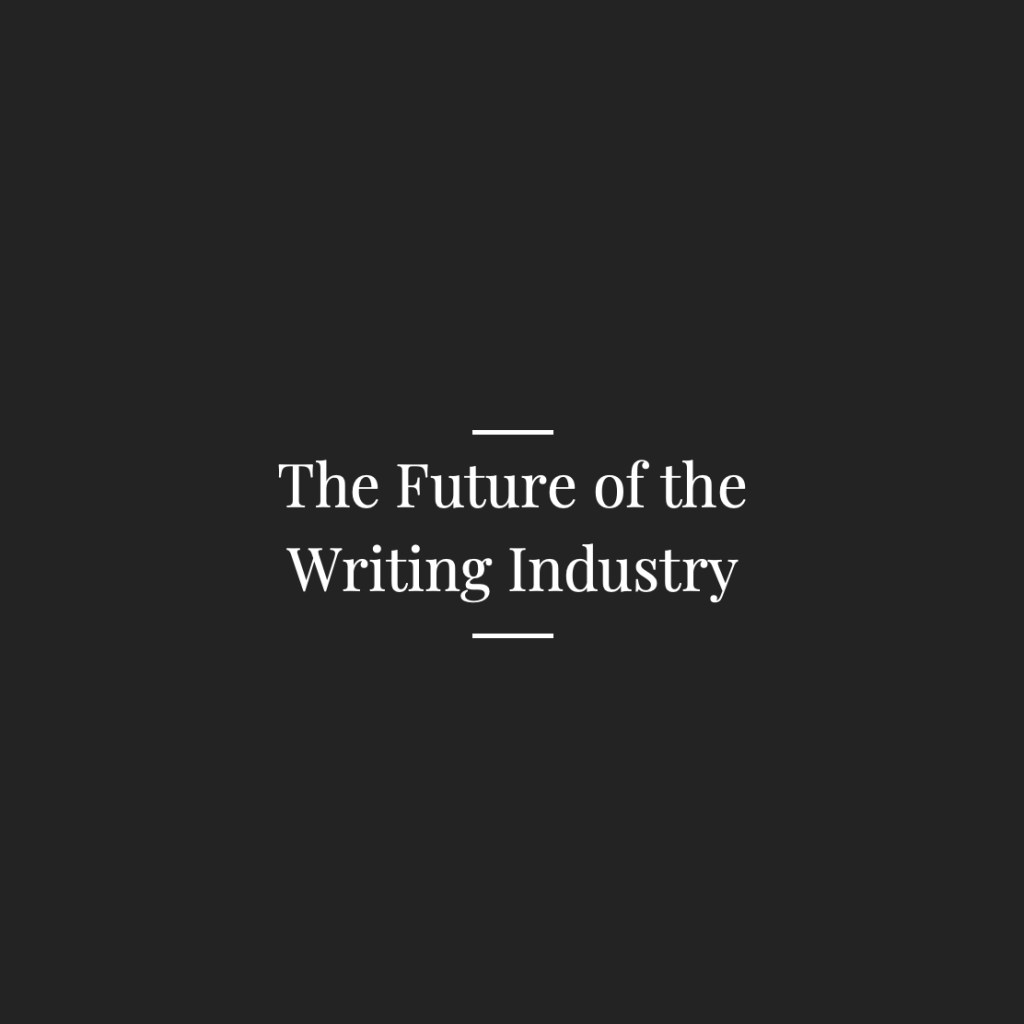 Ever since the beginning of the internet and the growth of the ebook industry, scholars and economists alike have wondered if this meant the end of the print and writing. The simple answer to that is no. The more complicated answer is that although print media will evolve and move more and more online, this is not the end of print media and physical publishing. Over the next ten years, it looks like the print media will be slowly shifting online, still publishing but moving more and more onto websites and social media due to accessibility and expenses. Meanwhile, there are new and interesting developments in the novel-writing industry that seem to spur the growth of books and creative writing as a profession.

According to the Bureau of Labor Statistics (BLS), the employment of authors and writers “is projected to show little or no change from 2018 to 2028.” However, they also claim that the industry will become more competitive due to the popularity of the profession and the appeal of working in the print media. It is well known that print media is a competitive profession. However, with this rise in competition, it is more important than ever to network and find connections within the community.

As of now, the writing profession is expected to grow by 8% over the next ten years (Job Outlook). Although this is the average, it is still clear that even as people move online, writing is not slowing down, but rather adapting with the times, spreading to both physical and digital media.

Furthermore, according to the BLS, people with more experience writing online and using digital media will have an advantage in finding work in the future. This is because much of the print media such as newspapers and magazines are moving online and will need people more adept with modern technology.

It should also be noted that as self-publishing becomes easier and e-books become a widespread form of reading, it is easier now more than ever for freelance writers to have the opportunities to publish their work without jumping through the hoops of the editing and publishing industries.

As times change and people slowly move online, the appeal of newspapers and magazines is slowly dropping. Therefore, companies are forced to adapt to the trends and move to more accessible and cost-effective platforms.

Newspapers like The Washington Post and The New York Times, although they still have their print media, are partially moving to online platforms such as websites to spread their news and journalism. While these new platforms are more accessible, especially for younger audiences, the shift to online media also makes sense for publishers because it is cheaper publishing articles online than printing on paper. It makes more sense economically.

In the face of this new technology, it is easy to think that print media is dying. However, it is nowhere near dead. Jay K. Goldscher, President and CEO of Printing and Graphics Association of the Mid-Atlantic (PGAMA), claims that “The future is yet to be written, because it’s whatever the demand will be, whether it be printing wall coverings [or other things].” In the following ten years, although more news agencies will be transferring online, the print copies will still be printed on a smaller scale. In terms of consumers, they will still be able to go to a newsstand and browse the newest editions of The New York Post or any other papers they enjoy. At the same time, they will also be able to open their laptop and easily search up the news with a simple click. In terms of the journalism profession, although there will be fewer physical papers, this does not mean there will be any fewer jobs in the industry. While it will become more competitive as it always has, all the writing that was once done on paper will be moving online. In other words, the drop in print does not mean the drop in writing as a profession.

Contrary to popular belief, ebook popularity has been on a slow but steady decline. From 2016 to 2019, the percentage of people that read an e-book in the past 12 months dropped from 28% to 25% (Perry). This shift is due to a variety of different factors, including the emergence and surge of audiobooks and the emergence and strength of the online bookish community.

Unlike ebooks, audiobooks have been on a steady rise, going up in popularity from only 12% in 2015 to 20% in 2019. Audiobooks are an efficient way to read especially in the chaos of the modern-day. Moreover, they are easy to access since most people can access popular audiobook apps like Audible from their phone or computer.

This could be attributed to the rise of the bookish community: a community of people who enjoy the experience of buying and sharing books along with reading them. As proven by the appearance of “booktube,” “bookstagram” and conventions like BookCon where readers can get together with their communities, more and more young people are reading and using the internet as a way to connect with other readers.

Generation Z especially, with the magnitude of fandom culture, brings with it a new wave of passionate readers that are willing to buy or borrow books, and since there will most likely be no change in the availability of writing and author jobs in the future, they will likely have plenty of content to satiate their need for novels, short stories, and poetry.

Michael Suarez, director of the University of Virginia’s Rare Book School, claims that “despite lots of writing to the contrary, the book is not dead.” Despite some written works having moved to ebooks and people becoming more interested in audiobooks, the book industry is not dead and will not be dead any time soon. The thing about books is that they create communities. There is a great number of people, especially young people, that adore going to bookstores, picking up a paper copy of the newest novel, and flipping the pages by hand rather than swiping on a screen. There is nothing wrong with ebooks and they are certainly a part of the future of writing as a profession, but they are by no means the catalyst for the end of novels as the world knows them.